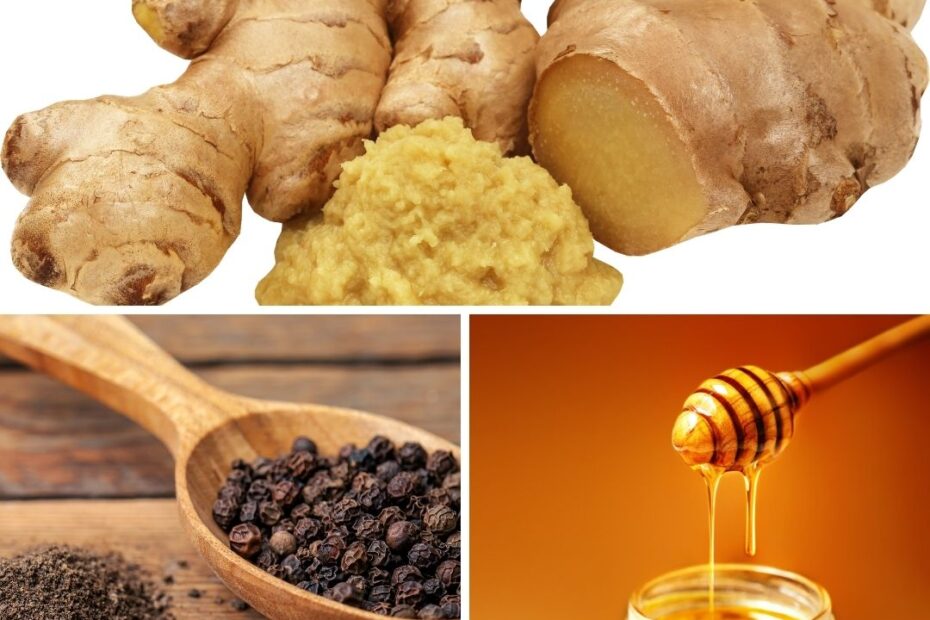 Anti-inflammatory drinks that I enjoy drinking and I think you will too. These drinks deliver a variety of nutrients, antioxidants, and free radical-fighting compounds to keep inflammation at bay and give our immune systems a little boost. I’ve got a vibrant assortment of drinks today, but you’ll certainly notice several orange-colored drinks and that’s because turmeric is the star ingredient in several of them from warm teas to cooling smoothies.

The first drink, we’re going to make is a deep and dark elderberry tea. You’ve likely heard of elderberry before because it’s the immune-boosting fruit that’s used in many over-the-counter cold and flu treatments like lozenges and syrups.

We’ll avoid any added sugars, colorings, and other ingredients with a simple three-ingredient tea and get those health benefits directly from the source.

So add two cups of water to a pot along with two tablespoons of dried elderberries. And you’ll notice the berries instantly start releasing their inky color. Then add one cinnamon stick which not only infuses a lovely flavor but is also anti-inflammatory. Bring the pot to a boil then reduce the heat to low and let it simmer for 15 minutes. Once the tea has finished simmering, turn off the heat and let it rest for five minutes then strain it. I usually strain it into a larger measuring cup first because I’m prone to spilling then I’ll pour it into a cup. This quick and easy tea is warming on a cold day but if it’s hot where you live, just chill this tea once you’ve made it and pour it over ice for a refreshing iced tea option.

Jammu is a traditional medicine from Indonesia. It is predominantly herbal medicine made from natural materials, such as roots, bark, flowers, seeds, leaves, and fruits. Materials acquired from animals, such as honey, royal jelly, milk, and Ayam kampung eggs are also often used

There are variations to Jammu, the key ingredient is usually turmeric and for this, I do recommend purchasing fresh turmeric root if you can get it. Turmeric root is similar in size and shape to ginger root but if you break it open, it’s a vibrant orange color whereas ginger is a light yellow color. And both of these together make for one powerhouse anti-inflammatory drink. To make it you’ll need approximately one cup of roughly chopped turmeric and one finger-sized piece of ginger. 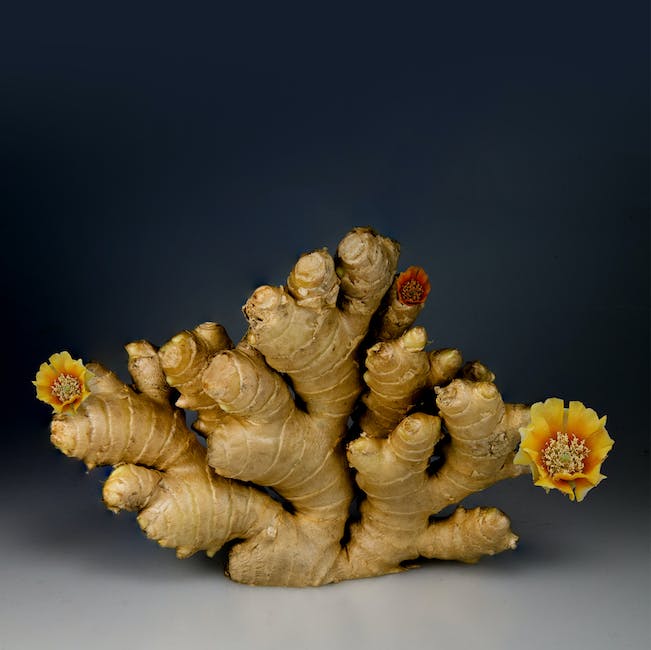 Because we’re going to strain this at the end you can actually skip the step of peeling if you prefer not to stain your fingers, just give your turmeric and ginger a good scrub. I fluctuate and sometimes I peel it and sometimes I don’t.

Slice it into pieces about a quarter-inch thick or so and measure that out and then add it to your blender. To that sprinkle, a little black pepper as black pepper can help to increase the absorption of curcumin from the turmeric. Pour in four cups of coconut water which has antioxidants and electrolytes and then blend it up at high speed for about a minute or until it’s fairly smooth. Pour that into a pot and bring it to a boil then reduce the heat to low and let it simmer for 20 minutes.

After it’s done simmering, turn off the heat and add the juice from one lemon and two tablespoons of honey, and give it a stir. Strain the mixture through a fine-mesh strainer or a nut milk bag, but just be aware that it will definitely stain your nut milk bag along with your clothes, countertop, and anything else that comes into contact with so do be careful.

Again I strain it into a much larger measuring bowl with a pour spout for fewer spills and then pour that into a glass jar that I keep in the fridge. You can enjoy jazz, chilled or warm and it will last for about a week in the fridge, just give it a good shake before serving. And I’ll usually enjoy about half a cup at a time.

For the next drink, it’s sort of a combination of the first two because it’s a turmeric tea and it’s really easy to make. Just add two cups of water to a pot and this time we’ll use ground turmeric rather than fresh turmeric just to provide some options. So add half a teaspoon of ground turmeric along with a quarter teaspoon of black pepper and two tablespoons of lemon juice, which is about the amount you’ll get from one lemon. Bring that to a boil and once it’s boiling, turn the heat down to low and simmer for 10 minutes. Once the tea has finished simmering, turn off the heat, add a little honey if you’d like, give it a stir and let the tea cool for a minute or two. Pour the tea into a mug through a strainer to remove the black pepper and again try not to spill because of the turmeric. If you do have any spills just make sure to wipe them up right away.

For a little extra lemon flair, I always like to add a few fresh lemon slices. And I will say that this tea while delicious was still piping hot, so I took a tiny sip. So now you can make them at home. For this recipe, you’ll need a quarter cup of roughly chopped ginger root and again you can peel or not peel the ginger.

You’ll also need a third cup of lemon juice, which is about three to four lemons depending on their size.

Add the ginger and lemon juice to a high-powered blender along with a quarter cup of coconut water and a pinch or a little sprinkle of Cayenne pepper.

Then add the lid, blend for about a minute or so on high or until the mixture is smooth. Once it’s blended, strain the liquid through a fine-mesh strainer. You also want to press on the solids with the back of a spoon to extract as much juice as possible. Pour the strained liquid into a shot glass and drink all at once. And yes, these are just as intensely flavored and spicy as the store-bought ones.

Next on our list is a cool and refreshing pineapple turmeric smoothie, that’s perfect for when the weather is hot outside. For this recipe, I’ll grate about a tablespoon of fresh turmeric and one teaspoon of fresh ginger.

In your high-powered blender add one cup of dairy-free milk, two cups of frozen pineapple chunks that are loaded with enzymes and antioxidants, one banana that’s high in potassium and will help to make this smoothie creamy, and the grated turmeric and ginger. Then blend that until it’s nice and smooth.

If you want a mild turmeric drink with a sweet tropical flair that will have you feeling good from the inside out this is the drink for you. For an anti-inflammatory smoothie that doesn’t include turmeric, but it’s still loaded with nutrients and antioxidants, I’ve got this luscious blueberry smoothie.

Add two cups of coconut water to your blender along with two cups of frozen blueberries, one frozen banana, half a cup of yogurt for beneficial probiotics and you can use dairy-free as well. And one tablespoon of flax seeds which are high in healthy omega-three fats and will help to thicken the smoothie.

Then add the lid, blend that together for about 30 seconds or so or until it’s beautifully creamy and beautifully purple. Pour the smoothie into a glass, pop in a straw if you’d like, and sip on this deliciously sweet and power-packed drink.

To make this you’ll need two tablespoons of lime juice which will usually get from one juice lime, one cucumber that sliced and we’ll add some natural liquid to our green juice, three stalks of celery that you’ve roughly chopped, and one apple that you’ve cored and sliced into pieces and you can use any variety of apple that you’d like.

Pour the lime juice into a blender along with the cucumber, apple, a small chunk of fresh ginger, celery, three kale leaves and you can just tear the leaves from the stems and one cup of spinach.

Your blender will be pretty full at this point and because we’re not adding any water to this recipe, you’ll need to use your tamper to push the ingredients into the blades. And to make things easier on your blender make sure to add the ingredients that contain more water like the cucumber and apple to the blender first.

But after a minute or so this should blend on its own just like any other green smoothie.  Of course, you can drink it thick and full of fiber but I know some people have a hard time digesting fiber so to turn this into a green juice, pour it into a nut milk bag and bring it out over a bowl, then pour it into a glass.

This is one nutrient-packed green juice with a hint of natural sweetness from the apple. And if you’ve ever wondered how to make green juice without a juicer, well this is how you do it.

The last anti-inflammatory drink on our list today is this apple carrot beet smoothie. And you can tell it’s brimming with antioxidants from its vibrant red color. I always say this smoothie is the equivalent of drinking your veggies and it starts with three carrots that you’ve peeled, trimmed, and cut into two-inch chunks. You’ll also add one medium beet, and to peel or not peel the carrot and beet is up to you. I tend to do just a rough peel on both of these and then slice the beet into large chunks. For natural sweetness core slice one apple, whichever variety you’d like, and then juice one large orange. Add the orange juice to your high-powered blender along with one cup of water, the sliced apple, carrots, beet, and a small chunk of fresh ginger. Add the lid, blend it on high for about a minute or until the veggies are broken down and smooth.

There are so many vitamins and nutrients loaded in this smoothie and it’s nice and thick. But now that you know how to make juice from a smoothie, you could always strain this one as well if you’d like. We all have different tastes and texture preferences and I am all about giving you options.